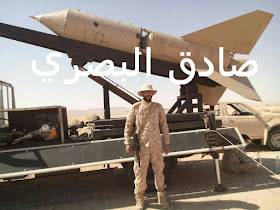 Iraqi Popular Mobilization Units (PMU) use a huge varieties of DIY heavy rockets.  Al Qaher, Al Batar, Al Ashtar, Falaq-2 improvised rocket assisted munitions (IRAM) are among the most used DIY rockets in Iraq. With the growing use of DIY rockets, whole brigades were dedicated to the development and the use of DIY rockets like Badr's Katiba Sawarikh Ababil. The DIY rockets differ in name, shape, weight but they adopt the same basic design which consist of  a (heavy) warhead and a rocket engine.

As i'm writing,  little is known about this DIY rocket.  From what we can see, the rocket has two stages. A warhead ( quite similar to the warhead of AAH Ababil rocket ) and a rocket engine. The engine is the interesting part. Unlike the others DIY rockets, the engine here is clearly identifiable. The rocket use a solid propellant booster taken from a S-75 Dvina variant surface-to-air missile fitted with four large clipped delta stabilizing fins. The markings suggest it's actually a Chinese variant of the S-75 Dvina, the HQ-2 . Indeed, those parallel lines are present on the HQ-2 but not on the S-75 Dvina. 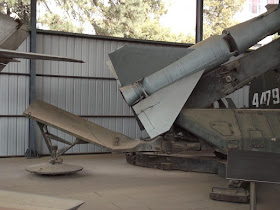 PMU fighters told me that they are quite satisfied with the payload of their DIY rockets but often complain about the short range of it (2-3 km). With this booster, the rocket is assured to have a much longer range than the previous ones. Most of Iraqi S-75 Dvina didn't survive the 1990 and 2003 war and the HQ-2 isn't known to have been provided to Iraq. Beside China, the HQ-2 was provided to Pakistan, North-Korea and Iran. So, this could have been provided by Iran.


And for the record, this is not the first time parts of S-75 Dvina missile are used for a surface-to-surface missile. Saddam Hussein era Al Samoud ballistic missiles were based on elements of the Soviet S-75 Dvina.


This article will be updated once more information is available